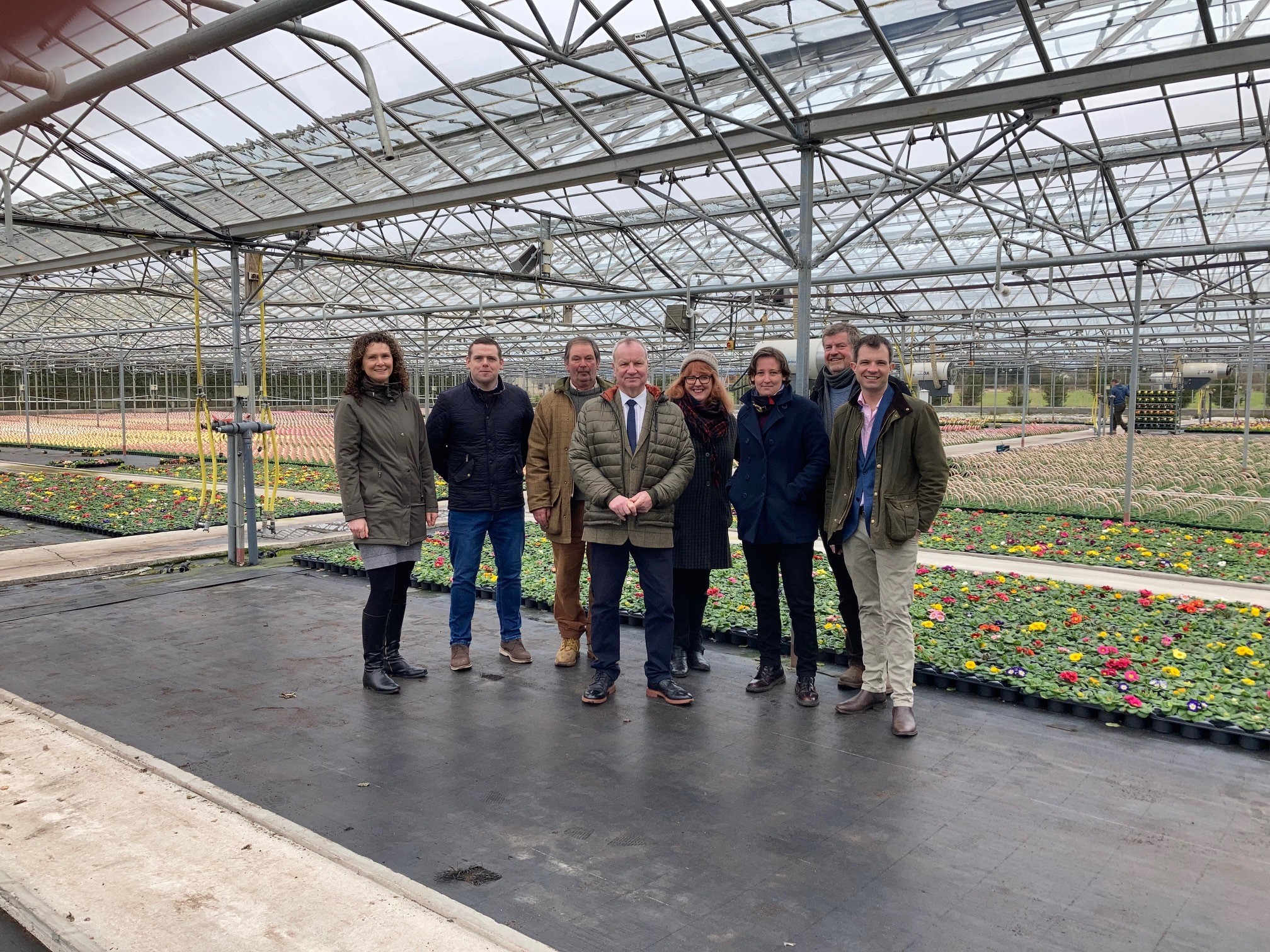 The Horticultural Trades Association (HTA) is working on a strategy to broaden Westminster’s focus on the issues its members are facing in Scotland. As part of this, they have facilitated a visit from the Scottish Affairs Committee to three horticultural businesses in Scotland, which took place Monday (28/02).

The visit highlighted the many strengths and challenges of Scotland’s horticulture industry and allowed the MPs to listen and learn directly from businesses. There was also an opportunity for the MPs to contribute to The Queen’s Green Canopy initiative by planting a ‘wishes tree’ at Glendoick Garden Centre, which the local community had decorated with wishes as a charity project last Christmas.

The HTA are calling on Government to increase the Seasonal Workers Scheme to meet the demand of the ornamental horticulture industry, including growers of trees, plants, seeds and bulbs in Scotland and the rest of the UK. Currently the edible agriculture industry is competing directly with horticulture for the same limited pool of overseas labour supply; therefore putting both industries at a disadvantage. The Scottish Affairs Committee gathered evidence of the impacts the industry faces due to labour shortages on the visit.

“During our whistle-stop tour of unique businesses, we heard the stark reality of the changing immigration rules. The businesses have automated as much as they can but the human touch is so important. They can only have people doing the work so they can produce a diverse range of plants.

“The need for seasonal workers will not be going away. We were told that the local labour market is not interested in this seasonal work. These Scottish businesses who make a significant contribution to the local economy need to thrive, and need workers to do this. We were so impressed with the products that are being produced and the lack of workers should not be a barrier to get these products to market.”

“A range of different businesses involved in horticulture met and spoke with the Scottish Affairs Committee. The committee got a chance to meet with the owners and staff and talk through the many challenges and some of the opportunities that face our industry. Top of the challenge agenda is the current seasonal labour shortfalls – something that could be addressed by the UK Government giving further consideration to increasing numbers for Ornamental Horticulture under the Seasonal Workers Scheme. Our customers want to buy British plants and yet we don’t have enough labour to increase production and satisfy that demand. The MPs saw, at first hand, what Scotland can produce and how important growers and retailers are. Indeed, how important the whole environmental horticultural industry is for wealth creation as well as the wellbeing of Scotland and our green space.”

The visit came at a key time for horticultural businesses, who have been navigating post-Brexit trade, labour and skills shortages, environmental policy issues, and the pandemic. Research for the HTA shows that the ornamental industry requires a further 3,000 workers across the UK. This deficit in labour supply could mean that trees, plants and bulbs are not produced, with consequences for the economy and environment.

“Our team were happy to welcome the Scottish Affairs Committee to Glendoick. I hope it gave them meaningful insight to the challenges which the already under pressure horticulture industry is facing with rising costs, Brexit and the loss of the single market which leaves whole sectors of Scotland’s horticultural and agricultural sector unable to export. The proposed peat ban with no suitable alternatives in place is going to be another serious challenge for Glendoick and the wider industry.”

As the HTA works to expand the voice of the horticulture industry with policymakers, visits such as these will play a key role in engaging government and supporting our calls for action including, a launch of a Scottish horticulture growth strategy, the implementation of an ‘earned recognition system’ in overseas trade and revised restrictions on seasonal labour.

The HTA hopes this is a step towards more collaboration with government and is eager to continue working with MPs to support our industry’s growth and unlock its potential £4.2 billion contribution to the Scottish economy.

Alan Down appointed as HTA Vice-President